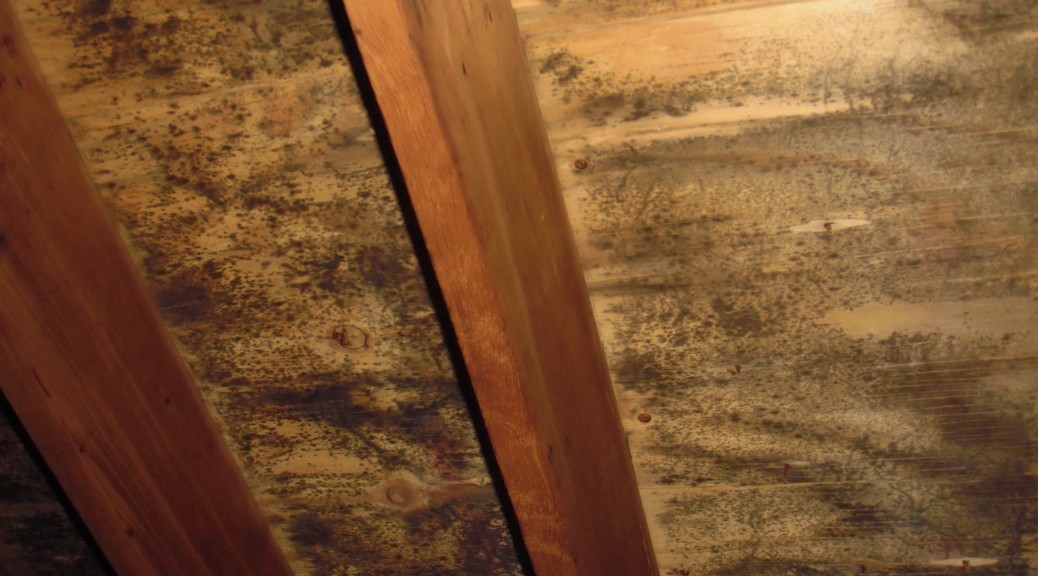 Some signs of excessive moisture accumulation in attics include: excessive rust, moisture, or frost accumulation on roofing nails; dark   stains, mold, moisture, or frost on the roof sheathing; excessive water drip marks on attic flooring or insulation; significantly buckled or delaminated roof sheathing.   These signs will vary, depending upon the severity of the condition.   These moisture indicators are usually worse on north facing or shady sides of roofs. Excessive moisture accumulation occurs because moisture condenses on cold surfaces,  just like moisture condenses on a cold glass of water. Moisture accumulation is most significant when outside temperatures are very cold because air can hold less moisture as the temperature decreases. The recommended relative humidity inside of a house during the winter months is approximately 30-50 percent. At higher levels of relative humidity condensation may occur inside of the house on windows, window frames, or cold wall or ceiling surfaces.

Depending upon how tight a house is constructed and outside temperature, even a relative humidity of 30 percent may be too high. Condensation can occur at relatively low levels of humidity if windows are not well sealed or are single pane glass. Some common sources of moisture include bathing, clothes washing, cooking, and breathing. These sources are typically not a major contributor to excessive moisture accumulation in the living space or the under-roof areas, unless the amount of moisture is unusually high, the house is very tight, or proper venting is not used.    Some other common sources of moisture accumulation that frequently result in excessive moisture accumulation in under-roof areas, and sometimes in the living space include humidifiers, water-moisture penetration through foundation walls or floor slabs, or use of unvented gas log or space heaters,  or kerosene space heaters.

Even when basements, crawl spaces, or floor slabs do not appear to be excessively damp they can be a significant source of    moisture accumulation.    Because of the relatively moderate temperature in the basement, crawl space, or living space this moisture can go unnoticed and may not cause any problems in these areas. As the moisture migrates into the under-roof area, which is much colder during the winter months, the relative humidity in these areas increases to the point that condensation can occur on cold surfaces. 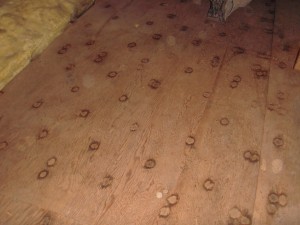 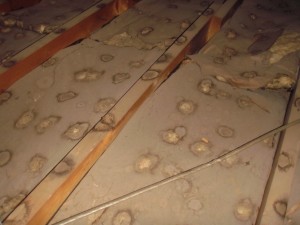 A simple test can be conducted to determine whether a significant amount of moisture is passing through a foundation wall or floor slab. Tape an approximately one foot square piece of aluminum foil or plastic sheeting on the wall or floor and leave it in place for at least one day. If moisture is observed behind  the material when it is removed, this is the result of water/moisture penetration. Note that if water accumulates on the outside surface this is typically due to condensation.

A condition commonly referred to as the stack effect is responsible for moisture migration into under-roof areas. As warm air rises, some of this air enters opening at the top of the house and passes into the under-roof area. Also, the air escaping at the top of the house causes the pressure inside of the house to decrease, causing cold air to enter through openings at the bottom of the house (this is called infiltration). Air infiltration is typically a significant source of heat loss in the average house. This increases heating costs and can effect comfort). Solving moisture problems may also decrease utility costs and make the house more comfortable.

Most of the openings that allow air to enter the under-roof area are not very apparent. Some common examples of openings found in houses include: gaps at pull-down attic stairways or other access openings; openings around chimneys and plumbing vent stacks; gaps at the top of the exterior and interior walls; poorly sealed joints in ductwork located in under-roof areas or in walls; opening in ceilings at wall cavities above stairways, above closets, etc; recessed light fixtures. A significant amount of air can leak through relatively small gaps and some openings can provide a direct path from the basement or crawl space into the under-roof area.

The best solution to solving a moisture problem is to control the moisture at its source. If the problem is caused by a humidifier, moisture can be reduced by adjusting the humidistat control, disabling the humidifier, or repairing the humidifier. If the problem is the result of water-moisture penetration, there are various remedial actions that may help. These can include: cleaning, repairing, or altering rain gutters and downspouts;  regrading the property- especially near the perimeter of the foundation; sealing foundation walls or floor slabs; using a dehumidifier; installing a drainage system. Because of the many conditions that can cause foundation water-moisture penetration and the many possible solutions, each house is unique and should be evaluated to determine the likely causes and recommended solutions.

After water-moisture penetration is controlled as best as is practical, the next approach to controlling moisture migration to under-roof areas and air infiltration is to seal the various paths of air leakage discussed above. A reasonable competent homeowner can seal many of these areas. Others are best addressed by a competent contractor or a specialized contractor familiar with weatherization techniques. Some contractors or consultants have specialize equipment such as infrared camera or blower doors that are useful in finding and fixing air leaks. It should be noted that the less air infiltration there is into a house, the higher the relatively humidity will be. If air leaks are properly sealed, this moisture will be in the living space, where it is desirable in the winter months. As a home is made tighter, heating and cooling costs decrease, the home is usually more comfortable, the there may be little or nless need to introduce humidity by using a humidifier. In extremely tight homes there can be a need use mechanical ventilation to assure that pollutants or moisture do not accumulate to unhealthy levels. This is usually not a concern in the average home, even after sealing typical air leaks.